Regional supplying of the Greater Region
with electricity generated from renewables

The project is supported by the Interreg VA-Programme of the Greater Region.

Eight partners from the Greater Region of SaarLorLux, Rhineland-Palatine and East Belgium wish to establish a total of four "energy zones". 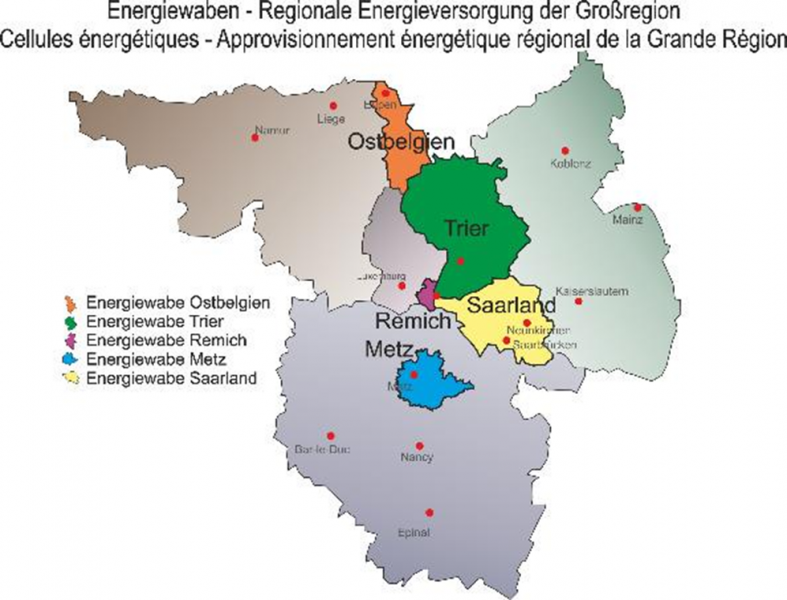 Four energy zones are to be built in East Belgium aund in and around the cities of Metz (F), Remich (L) und Trier (D).

The purpose of the energy zones is to explore a concept which uses a large proportion of regionally generated electricity from renewables and increases the security of supply in the Greater Region by means of a cross-border balancing of overproductions and shortfalls. Using the five participating regions, the concept will be simulated so that conclusions can be drawn in regard to its feasibility and transferability to other areas within the Greater Region. The aim is to ensure a maximum electricity yield from renewables and to prevent these from being throttled due to local surpluses. The contribution to climate protection and to the further development of renewables in the Greater Region is of primary importance in this process.

An energy zone can be thought of as a combination of electricity generation plants, storage systems and load management as well as different electricity consumers – from households to industry. Online-controlled storage systems which amalgamate, effectively in real time, the fluctuating feed-in and the level of consumption play an important role here.

With the partners from the Greater Region, a study shall firstly be conducted – as a simulation in real-time operation – on how the individual zones are to be optimally designed in order to locally maximise the supply with electricity from the fluctuating renewable energies (VRE) such as wind, solar and hydropower. In addition, the project will also test how the electricity can be exchanged beyond national borders, too, namely at the distribution grids level (low-voltage to high-voltage grids) in order to relieve the strain at the extra-high voltage level. An exchange of electricity of this kind would be a novelty because although electricity in Europe has already flowed across all borders for a long time, this has only been via the extra-high voltage level.

With the aid of an intelligent controlling of the generation and consumption of electricity as well as the grids, electricity generated from solar, wind and hydropower shall be used to its maximum. As the heating and transport sector will also require ever more electricity in the future, the resultant effects in the energy zones of Trier, Metz, East Belgium and the town of Remich will also be presented in order to take future developments in the supply and consumption of energy into consideration, as well. This shall promote the further growth of renewables in the Greater Region and, at the same time, both make a contribution to climate protection and add value to the region.

The first results are expected to be available for download in April 2017.