Creation of a national heat map of Luxemburg - Rollout

As part of a one-year pilot phase from the end of 2018 to the end of 2019, on behalf of the Ministry for Sustainable Development and Infrastructure, an approach to creating a national heat map for Luxembourg was developed based on the municipalities of Esch/Alzette, Ettelbrueck, Puetscheid and Luxembourg City.
The aim of the pilot phase was to record and evaluate the initial situation as well as the data situation on site in oder to subsequently develop an instrument whit which the municipalities can be supported in the implementation of the "climate pact" in the heating sector.
About a year later, the implementation or rollout of the approaches developed in the pilot phase started with this project.
The project is carried out on behalf of myEnergy in close cooperation with the Ministry of Energy and Spatial Development.
The project runs from April to December 2021.

Aim of the project

The aim of the project is to demonstrate the knowledge gained in the pilot phase in the pilot municipalities, to refine them and then to transfer them to the rest of the territory or to the other municipalities of Luxembourg. The methodology developed in the pilot phase is also to be expanded to include additional functions.
In addition, in order to fulfill Luxembourg's reporting obligation to the European Union, the potential for an efficient heating and cooling supply in accordance with Article 14 of Directive 2012/27/EU should be presented and assessed in the context of a cost-benefit analysis. 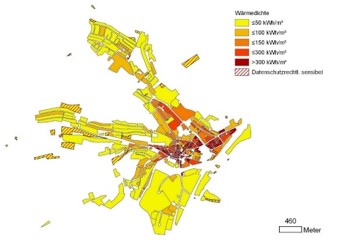 The project is divided into the following work packages:

Like the pilot phase, the project is being carried out jointly with eco:novis and Energiepark Réiden from Luxembourg. The consortium is complemented by IP SYSCON as a technical partner.