Implementation of an accrediation-ready test facility for solar thermal collectors according to EN 12975-1,2 for the IRI (Industrial Research Institute) in Beirut/ Lebanon Contract time: 08/2010 - 04/2011

The objective of the project was the design, construction and implementation of an accrediation-ready test facility for the solar thermal collectors for the IRI (Industrial Research Institute) at the university area in Beirut/ Lebanon.

The project was realized in cooperation with the greek institute CRES (Centre for Renewable Energy Sources and Saving), the UNDP (United Nations Development Programm), the IRI, the L.C.E.C. (Lebanese Center for Energy Conservation) and with the financing of the Hellenic Aid.

The main task was the establishment of a test facility according to the european standard:

The test facility is designed and implemented in a way that IRI can apply for an accrediation according to DIN EN ISO/IEC 17025 after the realisation of the project. 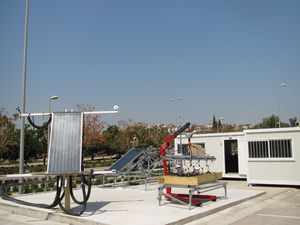 The test facility was planned and pre-assembled at the TZSB/ Germany with starting in August 2010. The equipment, components and instrumentation were delivered at the end of March 2011 and the commissioning took place in the early April 2011.
The initial measurement with the data acquisition system, the installed sensors and the individual test rigs was performed.
In addition two collectors were installed to validate the test facility at real test conditions and to conduct a training course in step with actual practice for the IRI employees.


The preliminary project conclusion was presented on a solar workshop with international participants at the IRI in Beirut. The TZSB had contributed to this event with a presentation and an expert guidance at the new lebanese solar thermal test centre. 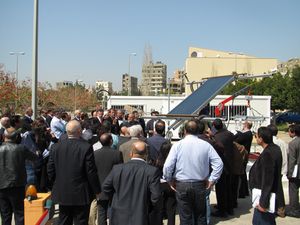 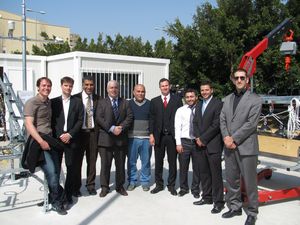